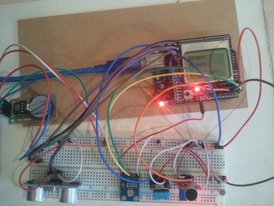 On this project, the idea was to generate a “random” number (note the quotes !) based on some of the information taken out from the environment next to the Arduino.

We can fetch the temperature, humidity and pressure (with BMP085 and DHT11), the seconds (with the DS1302 RTC Module), the luminosity with a photo-resistor, and the distance between the breadboard and something in front of it (with HC-SR04).

If a sound is detected (like a ‘clap’ or something else) (with a sound detector module) the program reads data from all the sensors and, with a little function, makes a big salad to get out a number.

Once the number is generated, we compute the dispersion rate of all the numbers generated since the launching, and print these two values on the screen.

Thanks to @thearcanum for the final hashing